And now for the downers

- Hands down, the number one thing I don't like about the house is not specific to the floor plan.  The attention to detail and professionalism of the people hired to do finish work left so very much to be desired.  Trim that doesn't meet right was just caulked (and still looks bad), the paint job was sloppy (I just found an entire wall covered in goobers, that we didn't notice before because who looks closely at closet walls?), some trim wasn't level, doors weren't hung quite straight, doorknobs weren't tightened securely so they wiggle around and scraped up the door paint, the list goes on and on.  My favorite?  The wood for the windowsills was cut too quickly, which left sort of a frayed edge...not exactly splinter wood, too thin and floppy for that, but easily fixed.  They didn't fix it...and the paint people painted right over it!  So we had painted bits of wood sticking out of almost every single windowsill!  Grrr.
- The wire pantry shelves were HORRIBLE.  They were awkwardly placed, didn't make good use of the space, and bent underneath the weight of just a couple cans of food.  This was the first big project we tackled in the house, switching to decent shelves.  I might end up doing the linen closet shelves down the road, but they don't hold canned goods so they don't bother me as much yet.
- They don't tell you this, although I know at least one other blogger was able to get it adjusted slightly...when you get 42" cabinets they're hung at the same height as the standard ones.  Which means they come down lower.  So tall appliances don't fit underneath them.  That part isn't a super big deal, since we're not coffee drinkers, but it does occasionally cause some annoyances.  Where it got us in trouble is that we can't open the doors of the cabinet above the fridge all the way, because they hit the fridge door's hinge.  Luckily that's where I store stuff I use very, very rarely.
- I know I'm going to be in the minority with this one...but I really, really don't like how huge the master bedroom is (hides from rotten tomatoes).  For us, and how we live, that's wasted space.  I wish we had given more serious thought to figuring out how to carve another room out of some of that, so that we could have an actual guest room.  All my bedroom needs is room for a bed, bedside tables, and dressers.  I could fit two bedroom suites in that room!
- The staircase is really hard to get furniture through, because of the bend.  They also extended the wall cap trim (for the section from the top floor to the landing) in such an absurd manner that it's a bit of a hazard to small children and ribcages.  The railings are not very sturdy.  And what the heck is up with this weird flat trim?  My kids hurt themselves on it at least once a week.  I really want to just rip it off and re-finish whatever's underneath. 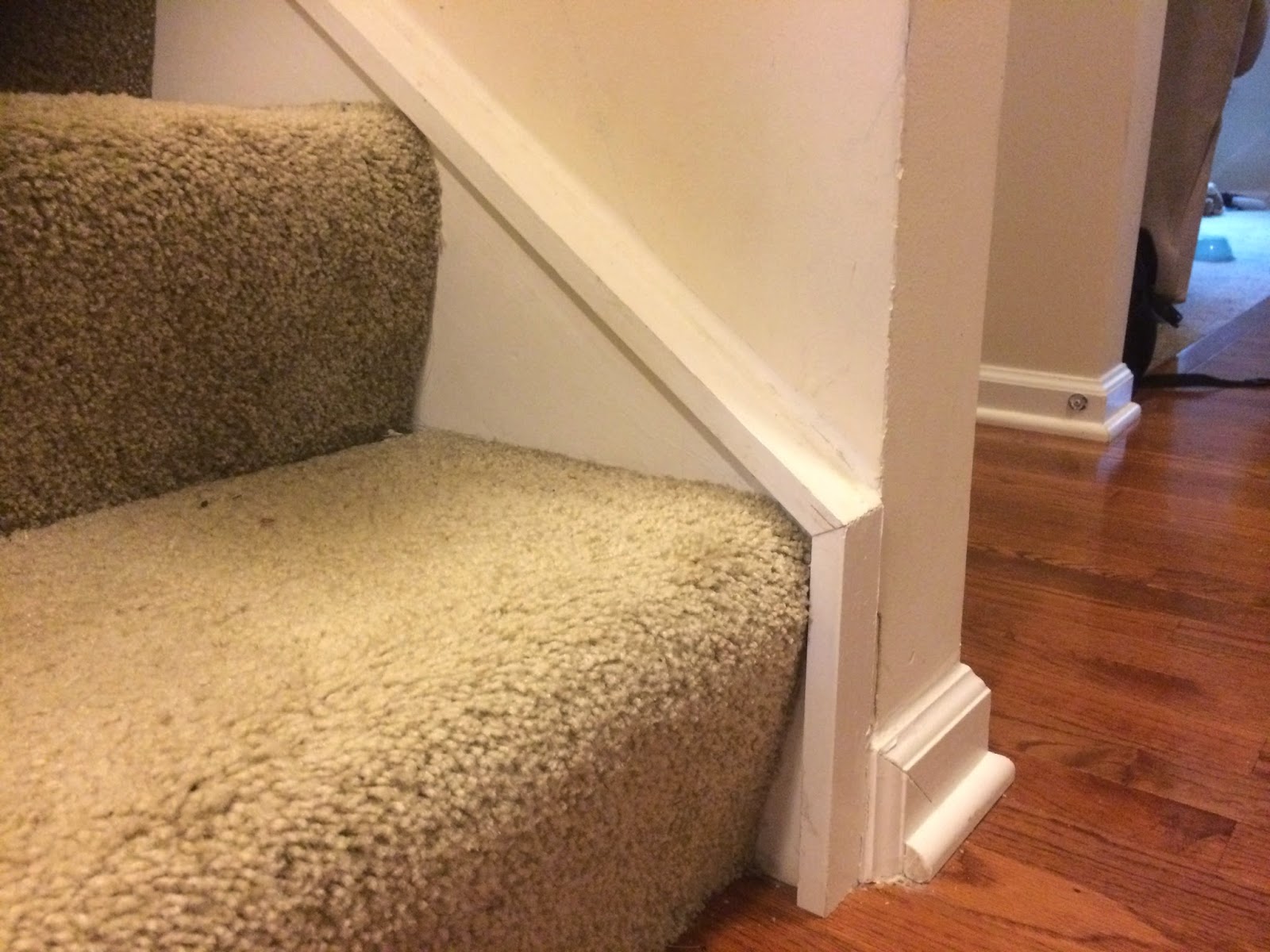 - The mudroom is a joke.  Seriously, why are they even allowed to call that a mudroom?  The model doesn't have any doors, which gives the illusion of more space, when in reality that garage door is totally in the way any time it's open.
- On elevation E, the living room window reaches closer to the floor.  Which means my kids stand on the window sill.  It probably will make it harder to put furniture in there, too, when we finally stop using it as the boys' craft room and put full-sized stuff in there.
- Having a pedestal sink in the powder room is somewhat less than ideal.  I'm still trying to figure out a way to keep supplies in there without cluttering the space up with cabinets or things on the floor.  We might swap that sink out down the road, still pondering.
- The landscaping was a joke.  Seriously, we have red clay here in Virginia and all they did was dig a hole, plop a plant from the pot to the hole, and cover it with mulch.  I'm shocked anything on our street is even alive.  Although we were the only ones to have anything actually die, so maybe they know something I don't.
- The placement of light switches is mind-boggling.  I've seen lots of variations on this in the blogs, and no two are alike.  We lucked out that there aren't any really annoyingly placed ones (middle of that kitchen wall, anyone?) but sometimes I want to smack the designers upside the head.
- The drawers in the kitchen are ridiculously shallow, in my humble opinion.  Not something I would have thought to measure!
- When you get double sinks, that doesn't give you much flat surface to put stuff on.  The sinks take up most of the room.
- The bathroom outlets are not in the most convenient place for hair dryers and stuff.  Petty, I know.  :)

And the things I'd do differently:
- A different lot.  I'm really not happy with the yard we ended up with, especially since we were given some verbal assurances that turned out to be incorrect.  We're making it work as best we can, but I have a much harder time letting my boys go outside to play than I was hoping for.
- BIGGER DECK.  I thought ours would be sufficient, but since there's no stairs down to the yard we really could have used the extra room so that kids have space to play when we're all out there.  It's a wee bit cramped right now, with the grill and two chairs.
- If you get the half-bath in the basement you can't do the shower rough-in.  It's either full bath or full rough-in, not mix and match.  What we didn't know was that there's no way to come back after the fact and add a shower in there, even though there's room if you take out that wall.  Probably there can be some creative plumbing done to get a shower in there, but if we'd known about that we'd have gotten the full bath.
- The bar between the kitchen and morning room is more annoying than useful.  When we upgrade our countertops down the road, I might just have them take that out and make that section of counter a little deeper.
- I'd try to get a bay window somewhere.  It didn't appear to be an option in our neighborhood, but I've since seen it on other houses (not Romes, though).
- I'd pick a different siding color, so we could do a brightly colored door.  Not much goes with green!
- No tub jets.  Waste of money, they're really loud so we never use them.
- The master bathroom is kind of...boring.  I think I would pick different tiles next time.

And just to end things on a more positive note, the things I thought would be bad that turned out okay:
- The soaker tub.  I didn't think we'd use it enough to justify it, but we actually use it quite a bit.
- I originally wanted every available window installed in the house, which would have added one to each of the front bedrooms and one to the front living room.  As it turns out, the house on the living room side of us is so close that the two on that side would have been pointless, and really having two windows in the bedrooms would have made for difficulties in furniture arrangement.  Plus that living room wall is where my built-in bookcase is going!

Alright, that's all I have for now.  I reserve the right to do follow-up posts, though, if I think of any more likes or dislikes.  :)
Posted by Amanda at 11:28 PM

Amanda
I'm a SAHM and a MWAC. Wanna fight about it?